In an era where manufacturers seem to be abandoning larger-bodied, professional cameras for smaller, box cameras that cram in features, Blackmagic went the other way. Rather than compromising with a new smaller design, or limiting the cameras abilities they went for it – putting the absolute best visual quality they could into a form factor that works well for their existing users.

To say that Blackmagic left us all a little shocked when they released the URSA Mini Pro 12K would be an understatement.  Flabbergasted or stupefied might be a more suitable word. Lots of us didn’t even know what to think.  Most of us just started shooting in 4K or even watching content in 4K just a few years ago. Why on Earth would we ever need 12K?  Who even asked for this?  Why did they do it?

The answer: Тhey did it because they can. For the first time in our entire industry we have a single company that totally controls the entire imaging pipeline of a camera platform. Blackmagic makes the sensor, the camera, the color science, raw codec, and the editing and finishing software with Resolve.

Red might make the camera, sensor, and codec but not the editing software; they have to rely on 3rd party programs, plug-ins, and partnerships. With this new camera, Blackmagic has designed their own sensor from the ground up to specifically take advantage of their BRAW codec.

With a reported 14 stops of dynamic range and an attention-getting 12K resolution, this also represents a significant change in the codec options available on the URSA Mini Pro. Blackmagic had previously removed cDNG, and now ProRes as a recording option; relying solely on their proprietary BRAW for the URSA Mini 12K. And it is this little detail that makes the release of this camera so special.

Capturing 12K footage creates a lot of data, and currently only the BRAW codec has the capability to handle it efficiently enough to give us the ability to even play it on an editing system.

But if you’re thinking 12K is just a game of oneupmanship they’re playing with Red, ZCam, Canon, and Kinefinity you are dead wrong. 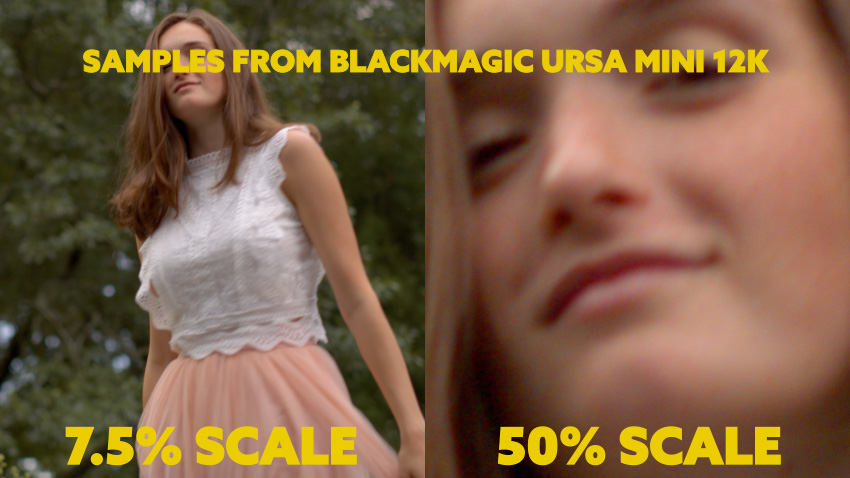 The new RGB CMOS sensor that BlackMagic has developed has a distinct advantage over the Bayer sensors used by every other manufacturer in that it can deliver a raw, full sensor read out in lower resolutions.

With the URSA Mini 12K you can film in 8K, 6K, and 4K raw without cropping.  You don’t have to shoot in 12K to get the best raw image from your camera, and we’ve never seen anything like this before! On top of that the frame rates are frankly insane. It’s as if Blackmagic stole this camera straight out of the future.  None of my clients have ever asked for this extreme level of resolution or slow motion, and when I watched Grant Petty deliver this news on their livestream my first thought was simply, “Why?”.  Then, I thought about it and asked myself another question, “Why not?”.

I don’t need these features, but why has every other camera been confined by arbitrary standards for so long?  Because someone else was always controlling how we did everything after the shoot had wrapped in post. RED had promised something similar long ago but was never able to deliver because their cameras had to work with Avid, Premiere, or Final Cut and the computers we were using couldn’t handle what was possible.

Blackmagic has spent years acquiring, building, and developing the pipeline to make this possible and that isn’t just special, it’s the thing that separates the artist from the ordinary. We don’t do it because you want it, we do it because we can.