Even today the debate whether Apple’s Mac OS X is better than Windows for video editing still creates controversy among seasoned professionals and enthusiasts alike. Many tend to believe that overall Apple computers are better for system intensive tasks than PC’s, especially when it comes to video editing. Yet, from hardware perspective, this doesn’t make a lot of sense simply because both Mac and PC configurations are built of identical hardware components. In the end of the day, they just use different operating systems.

The US-based cinematographer and educator Max Yuryev has already got the chance to figure out how does Adobe Premiere Pro perform in a real-life situation tested on both Windows 8.1 and OS X El Capitan as he shares his experience and insights on the topic in the short video below.

Max has conducted a series of tests on virtually identical computers running Windows 8.1 and OS X El Capitan at the same time where he rendered multiple video files ranging in time-duration, resolution and filters applied on top and finally measured the render time on both systems. In the first test he took 20 seconds long 4K clip and after applying the Warp Stabiliser, he measured the render time on both platforms. Here are the results. 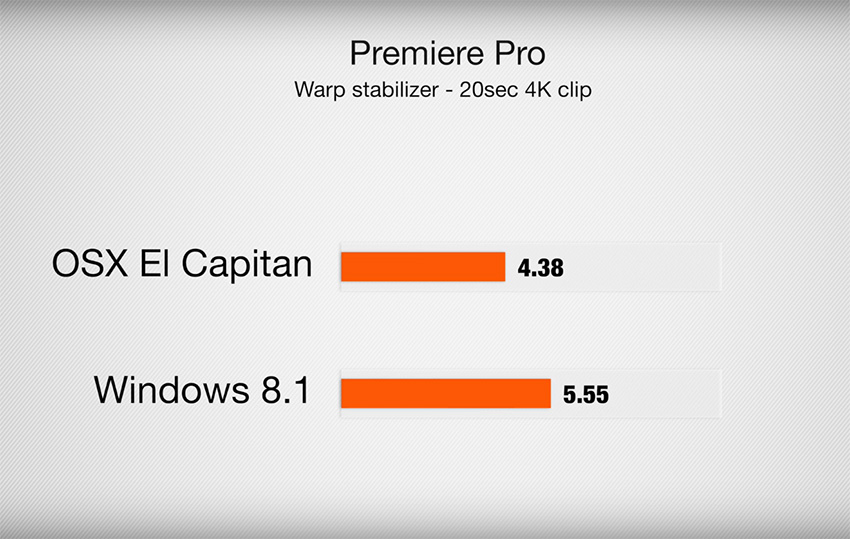 In the second test, a 5 minute 4K clip was used with two LUTs and film grain applied on top. This time, the render times were slightly different. In the final test, four 4K clips scaled into a 4K timeline where each clip has 2 LUTs and film grain applied were used as two of the clips were running in reverse. The render time in OS X resulted in 3.32 sec whereas in Windows 8.1 the same process was completed in 3.45 sec. All in all, these results show that there isn’t any significant difference between render times in OSX and Windows when using the same piece of software on virtually identical hardware configurations. Of course, rendering is only one of the aspects of the overall post-production workflow and it’s quite difficult and premature to make conclusions based on only a single criterion.

More or less, the final decision whether to get a PC over Mac (or vice versa) should be based on many other factors such as budget restraints, personal preferences, the ease of use of each operating system etc rather than the actual performance during rendering simply because the results one may get when using multiple applications may vary.