Canon DSLR bodies might have been left in the dust by the rise of mirrorless cameras, offering superior image quality, 4K recording, smaller form factor, and better value for money compared to the expensive Canon DSLR bodies like the 5D mark III or the even more expensive 1DC. However, Canon EF lenses have been one of the most popular choices for video shooters using a GH4 or a Sony A7s. Adapting these lenses in general is not such a big deal on the A7s, which is a full-frame camera, but when it comes to the Micro 4/3 format (2.0x crop to FF), the difference in focal field of view becomes apparent.

Getting a really wide angle on a Panasonic GH4 isn’t as easy as on an A7s, but on the other hand Micro 4/3 users can benefit from longer field of view on lenses compared to full frame. You lose on the wide end, but gain on the long end. Up until now, GH4 had to use either the Speed Booster “S”, which offers electronic aperture support on EF lenses, or the Mark I EF to MFT adapter, which offers 5V external power support – handy for those BMCC MFT shooters.

The Speed Booster XL 0.64 will be available in two versions – Nikon F/G to MFT and Canon EF to MFT. The Nikon Speed Booster XL is currently priced at $479, while the Canon version is more expensive at $599 as it does support Electronic aperture control and Image Stabilisation, unlike the Nikon version, which features a manual aperture ring and does not support electronic functions. Earlier this week Metabones announced their latest addition to the Speed Booster lineup – the XL model, which has been specifically optimised to work with the Micro Four Thirds Panasonic GH4. Long awaited by the GH4 crowd, the Speed Booster XL has a 0.64x crop factor, which translates into a 1.28x crop to FF in Full HD, or 1.5x in 4K Cinema mode – which is the equivalent to the industry standard Super 35 format, highly desired by most video shooters.

Compared to the Speed Booster S EF to MFT (currently $599) for example, which was the go-to adapter for GH4 users who wanted to use Canon EF mount glass, has a 0.71x crop.

A new Micro-4/3 mount Speed Booster® adapter designed exclusively for the Panasonic GH4 and other selected Micro Four Thirds cameras (refer to the below camera compatbility table), with a magnification of 0.64x.  The Speed Booster XL 0.64x uses an advanced 6-element optical design to achieve extraordinary optical performance at apertures up to an incredible f/0.80, a new record for Micro Four Thirds format.

The new Speed Booster XL 0.64x reduces the full-frame crop factor of the Panasonic GH4 from 2.0x to 1.28x, thus effectively transforming these cameras into APS-H format.  When the GH4 is used in Cinema 4k video mode the horizontal full frame crop factor is reduced from 2.34x to 1.50x, thus effectively transforming the GH4 into a super-35 format 4k cine camera.  In addition, the speed of any attached lens is increased by 11/3 stops, with a maximum output aperture of f/0.80 when an f/1.2 lens is used.  For example, a 50mm f/1.2 becomes a 32mm f/0.80, which is the fastest aperture available for full size Micro Four Thirds format. (More information can be found in the press release here ) 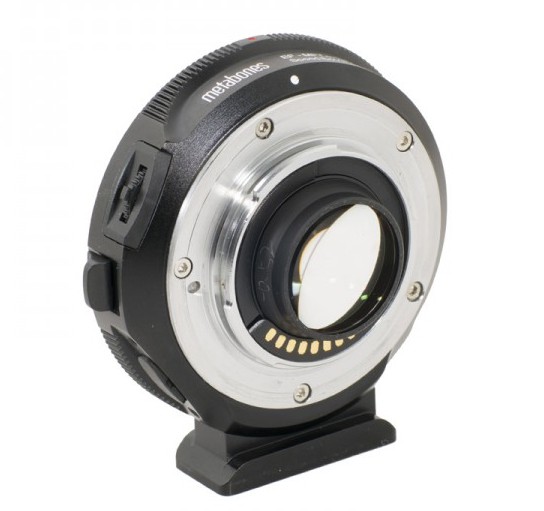 The new Metabones Speed Booster XL 0.64x is similar to the Blackmagic-specific 0.64x BMCC Speed Booster (MB_SPEF-BMCC-BM1), but has been completely re-designed to meet the following requirements:

This is certainly good news for those like me who have a GH4 but held off on buying a Metabones Speed Booster, and looks like the wait might just pay off. For those who already own one, it shouldn’t really be such a big deal as the FOV is comparable. Still having a dedicated adapter is a safe choice. Now, the only thing left to be improved on the GH4, in my opinion, is the addition of V-Log L, which will hopefully be released soon sometime this Summer.