One of the highlight announcements at this year’s CineGear Expo in Los Angeles was without a doubt the latest addition to the Canon Cinema EOS lineup – the Canon EOS C200. To the surprise of many, Canon have included an internal compressed 4K Raw recording onto a single CFast 2.0 card in a brand new format called Cinema Raw Light in the new C200. The new C200 sits between the C100 Mark II and the C300 Mark II in the Canon large sensor pro video camera lineup, and given that the C200 is the first Canon EOS Cinema (or any) camera to feature such an advanced recording format at a sub $10K price level, turned quite a few heads and raised some eyebrows. 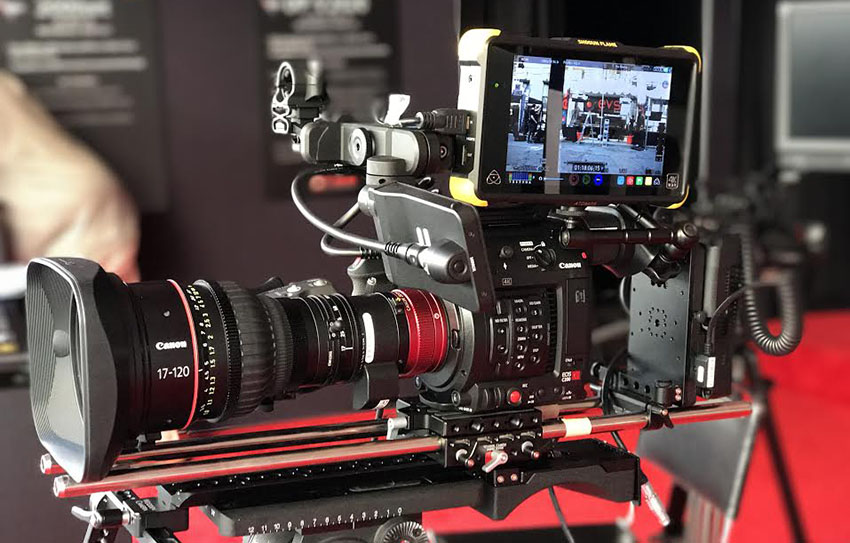 Canon seems to have (purposefully) omitted an internal 10bit codec and instead put a rather thin 8bit 4:2:0 MP4 substitute, however according to official information, Canon are committed to an upcoming firmware update in early 2018, which will enable an 8bit 4:2:2 XF-AVC compression.

The big feature in the C200 that seems to be on the tip of everyone’s tongue is of course the internal 12bit (and 10bit) internal 4K Raw recording. According to Canon, it is said to offer substantial disk space savings with an approximate 1 Gbps data rate and a 3:1 and 5:1 compressions depending on whether you shoot in 24p or 50/60p.

Melbourne based Cloakroom Media have been very busy shooting with the brand new Canon C200, which is due to ship in a couple of months, and have posted a series of tests and some excellent C200 footage on their Vimeo page. The dance film teaser below was shot on the C200 in 4K Raw at 50p with the help of the awesome Freefly Tero specialty stabilizer vehicle.

Behind the scenes (with overlays):

The Canon C200 features two LOG gamma’s internally – Canon LOG and Canon LOG 3. C-Log 2 is missing as it was developed for the 10bit internal XF-AVC 4:2:2 codec present in the C300 MK II, and since the C200 obviously lacks such, Canon decided not to include it as an option in the menu, however if you shoot in 4K Raw you can then use Canon Raw Development tool to export in CLog 2. See the Cloakroom Media test comparison between the C200 and C300 II below.

Our initial intention for this test was to show a high contrast scene, where we could see where each camera’s limit was for highlight recovery. As it turned out, the blue skies turned grey just before we rolled up, as a result we got a very even exposure. So that test will come. The results here are very interesting, there is a great amount of increased detail on the C200. I used the identical lens on both cameras, they shared the one CN-E 50mm.

Note: There is a slight greenish tint on the C200 clips, this is because on export to pro res I did not leave the tint settings on “As shot” by mistake. I will re-upload shortly.

Here is a quick example of tracking any object in your scene.
Shot in 4KRAW 25p 12 Bit
Converted to ProRes 4444
Edited in FCPX

From the tests above, the C200 clearly shows it is a very capable camera in 4K Raw. Yes, there are significant limitation such as a low-bit rate 8 bit codec and the additional workflow procedures required to process the 4K Cinema Raw Light, but soon major NLE players such as Adobre Premiere Pro CC and Resolve (if it doesn’t already) will have support for the new Raw files from the C200.

It looks like the C200’s compressed Raw behaves much better than the first generation Canon Raw from the C500 and C300 II, which bakes in ISO and WB value, which in my opinion, defeat the whole purpose of shooting in Raw, plus the are 10bit, so to have a 12bit “real” compressed Raw option is quite exciting.

It is also evident from the tests above that the noise at high ISO’s is quite manageable when treated with noise reduction software such as Neat Video (and I am sure others will work just fine, Neat Video is what the Cloakroom media guys used in their test).

So, what do you guys think about the C200? Would you take it over the new Panasonic EVA 1? Or would you rather go another route?