Alongside the latest iterations of CC applications, Adobe has also released a brand new version of its beloved editing platform Premiere Pro CC 2018. With the update comes a jaw-dropping amount of performance updates, including some new features that promise to significantly increase post-production efficiency for whatever needs your workflow may have.

From increased support for cameras in the Lumetri panel to new options that enable better editing processes with VR, Premiere Pro is hoping to suit the needs of seasoned video editors and novices in the present and the future. While the update does have a number of new assets, seasoned video editor Justin Odisho has created a list of what he believes to be the most exciting features in Adobe Premiere Pro CC 2018.

One feature that will cause video editors alike to rejoice is the ability to finally open multiple projects simultaneously. This functionality can literally be described as a godsend considering the ability to open several projects in an instance has been a highly demanded feature for quite some time.

With this option, it is now easier than ever to transfer assets/settings/clips from one project to the other. This eliminates the need to render from project A to add an edit to project B, hunting down source files from previous projects, etc. Even though it’s relatively new, Adobe is really pushing users to take advantage of the Essential Graphics panel with the recent enhancements made to the tool. When you have multiple assets in an Essential Graphic clip (i.e. main title and subtitle), for instance, you may find that it’s difficult to move the graphics all at once since they’re separated, meaning that you’ll have to manually adjust the position for each.

With the recent Premiere Pro CC 2018 update, Adobe has introduced what they call Responsive Design, allowing you to pin one asset to the other so that you don’t have to keep adjusting parameters such as position for each graphic. 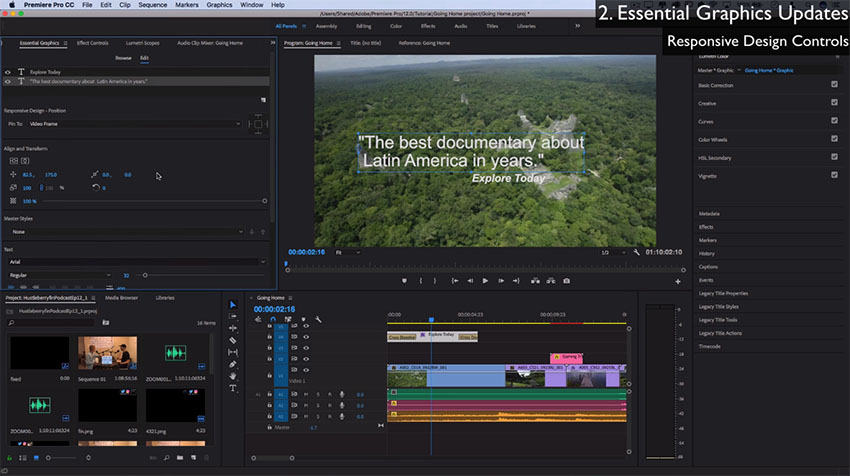 In line with updates for the Essential Graphics tab, you are now able to edit multiple text layers at the same time. This simple, yet convenient feature will be a huge time saver for those constantly using text graphics. In addition, there are also time settings under the Responsive Design functionality, allowing you to manipulate intro/outro duration and roll animations. Plus, responsive Design position-based controls preserve the spatial relationship between layers and video frames when adding animation, changing the character count in a tile, or moving between different frame sizes or aspect ratios.

You can take advantage of these new features and much more by updating your application at no additional cost using your Creative Cloud membership. With this update, as well as with the previous iterations of the NLE, Adobe engineers continue to follow the trend of adding practical features that should allow content creators to save even more time and energy in the creative process down the road.