The DJI Ronin-S gives filmmakers a multitude of creative possibilities when it comes to complex camera movements so that it’s really hard to pick just a single trick as your favorite cinematic technique. This long and super steady 360-degree roll angle movement, however, is definitely one of the dopest ones I’ve seen lately.

Best of all, it doesn’t require the insanely expensive filmmaking gear that it used to only a few years ago. Instead, Josh of Momentum Productions provides an easy to follow step-by-step guide that showcases how to nail this shot down only by using the single-handed gimbal while sharing his best practices and insights along the way.

To achieve this obscure and abstract camera movement, you first need to do a few tweaks in the DJI Ronin-S app. The latter provides all the necessary controls to adjust the gimbal and set it up properly for the actual shoot. After launching the app and connecting to the gimbal, tap on Configuration and select one of the three user profiles at the top of this menu.

Then navigate to the Control Settings>Channels and go down to Channel 3 which is specifically targeted to control the settings of the gimbal’s joystick. Tap N/A, change it to ROLL, and hit the back button. Furthermore, if you want to fine-tune the speed or rate of the roll movement, tap on Motion>Max Speed where you can either customize the speed or opt for any one of the available presets. Don’t forget to set the gimbal to the specific shooting mode in the app you want to use for this particular movement. Afterward, hold the gimbal as if you are using a flashlight, and double tap the front trigger. Now, you can use the joystick to enable the infinite roll movement by pushing it to either side. Note that the control is speed-sensitive, so it all depends on how hard you push it to the side.

Also, keep in mind, that if you hold the stabilizer up or down, even at a slight incline, you won’t be able to perform a full 360-degree roll. That’s why it’s paramount to keep the device perfectly straight while performing the technique. To re-center your camera, simply double tap the front trigger one more time. 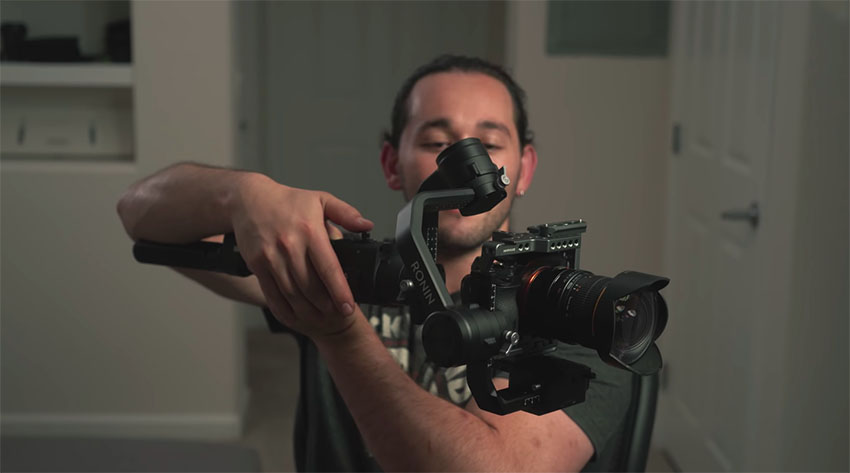 To smooth out your shot even further, try to bend forward and walk slowly ahead while trying to reduce the vibrations caused by your body movement to a minimum. Shooting in a narrow area or even a close space will also help you add more depth to your shot and disorient your audience even more. Another tip is to shoot at a higher frame rate and then slow down the clip in post.

Of course, be careful not to overdo the trick. You don’t want to get your audience too dizzy or distracted. Rather than that, be intentional and wise when using the technique and make sure it complements your visuals. Just like any other creative camera movement, the infinite spin could be indeed a powerful asset in your filmmaking’s arsenal as long as it enhances your story.