Home
Blog
DJI Mavic 2 Pro vs Mavic 2 Zoom – Which One Should You Pick?

Two weeks ago, DJI released the successors to the original Mavic Pro drone – the Mavic 2 Pro and the Mavic 2 Zoom. While both drones share similar technologies, each product was designed with unique features in mind that have certain advantages in different shooting scenarios.

If like many folks, you’re still having trouble deciding which Mavic drone is right for you, you might want to take a look at the video from We Talk UAV below where Alex Assenmacher compares the Mavic 2 Pro and Mavic 2 Zoom, thus helping clarify the differences between the two counterparts.

First, it’s important to understand the similarities between these two drones. For starters, the construction, sensors, and gimbal technologies they provide are largely the same. Each unit can shoot UHD 4K up to 30fps and shares automatic wireless channel switching (2.4 and 5.8 GHz), H.265 video compression alongside enhanced OcuSync transmission technology that delivers 1080p video feed from up to 5 miles away.

Furthermore, both Mavic 2 Pro and 2 Zoom can last up to 31 minutes at a maximum speed of 72 km/h when using Sport mode. Regarding drone safety, both feature 360-degree sensors (located on the top and bottom) in addition to object detection and collision avoidance algorithms. The Pro and Zoom models also include updates from the original Mavic such as Active Track 2.0 for increased object-tracking accuracy and the new auto Hyperlapse capturing mode. While both drones do possess similarities, there are some key differences that set the Zoom and Pro models apart as well.

For the Mavic 2 Zoom, its main standout feature is the ability to zoom optically. The camera found on the Mavic 2 Zoom features a 2x optical zoom that gives you a range between 24mm to 48mm, allowing you to play with different focal distances.

Additionally, you can do 2X digital zoom when filming 1080p video. When combining digital and optical zoom together, it’s possible to get a 4X zoom or 96mm equivalent field of view. Needless to say, that’s an insane amount of zoom for such a small drone. This functionality enables you to capture footage with a degree of visual depth never seen before on a DJI drone, helping you get closer to your subject on the fly. Another unique feature available on the Mavic 2 Zoom is the ability to take what DJI calls a Super Resolution picture, which essentially stitches multiple photos to create a 48-megapixel panorama of the surrounding area.

While looking at the Mavic 2 Pro, its highlighted specification is without a doubt its Hasselblad camera. The latter sports a 1-inch sensor that enables the drone to capture stunning, 10-bit UHD HDR video, resulting in footage with amazing color fidelity. The Mavic 2 Pro bigger sensor also seems to have better low light capabilities when compared to the Zoom 2 camera. The camera also has f/2.8-f/11 adjustable aperture that can be pretty handy when nailing down your exposure in constantly changing lighting conditions.

In fact, if you take a look at the shots in the video, you can see the improved image quality and superior color rendition right off the bat. With the Mavic 2 Pro footage, there’s a richer gradient in the sky compared to the flatter aesthetic of the Mavic 2 Zoom. Moreover, the Mavic 2 Pro produces slightly sharper footage than the Zoom. 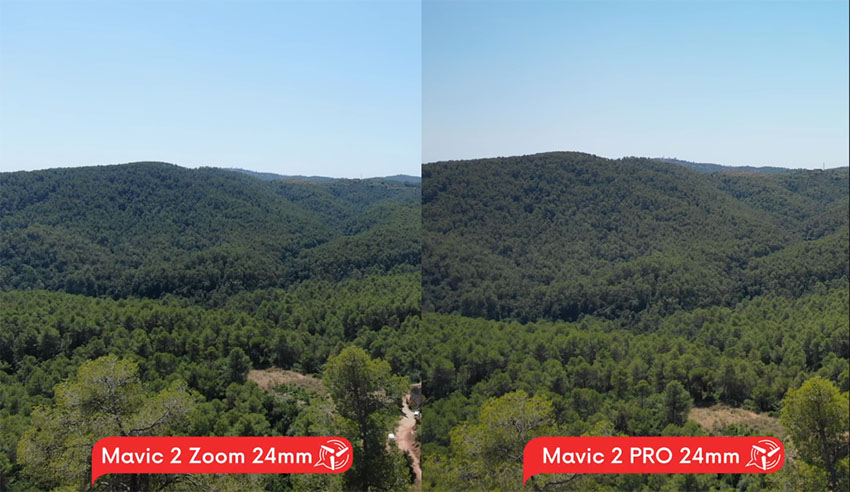 Despite the subtle differences between the two products, both the Mavic 2 Pro and Mavic 2 Zoom have earned their place in DJI’s product lineup. For aerial videographers who need to keep their distance, the Mavic 2 Zoom provides the flexibility required to capture shots from afar.

On the other hand, for those looking for the highest-quality drone footage for a reasonable price, the Mavic 2 Pro will definitely satisfy even the most demanding professionals out there who want to take their aerial videos to the next level.