Panasonic may have announced their cinematography oriented Lumix S1H full-frame mirrorless camera with 6K recording options at Cine Gear 2019, but it looks like they are not putting out their Micro Four Thirds division to pasture just yet. That’s because Panasonic have announced a new super-fast wide angle zoom for MFT – the Lumix LEICA DG VARIO-SUMMILUX 10-25mm f/1.7 ASPH.

The Leica c0-branded 10-25mm boasts a very bright and constant f/1.7 aperture throughout the entire 20-50mm (35mm camera equivalent) zoom range. Needless to say, Panasonic are also boasting key features such as exceptionally high optical performance as well as a de-clicked aperture that is suitable not only for stills shooting, but also for video.

Most MFT shooters rocking GH5’s/GH5 or the BMPCC often rely on a single wide-angle (or standard really in terms of the MFT crop) and in most cases that de-facto go-to lens has been the mighty Sigma 18-35mm f1.8 Art, which can be “speed boosted” in the Nikon or Canon EF mount. Well, Panasonic are set to change that, thanks to their new Leica-optics-provided 10-25mm f1.7 in the native MFT mount. 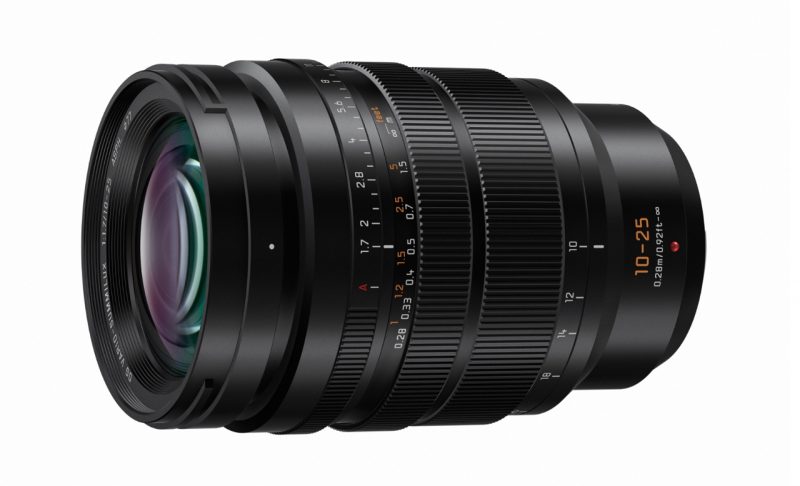 The lens is big and heavy, and this is a result of the impressive optical design consisting of 17 elements arranged in 12 groups, featuring three aspherical lenses and four ED (Extra-low Dispersion) lenses that effectively suppress the axial chromatic aberration and chromatic aberration of magnification. Compatibility with a maximum 240-fps high-speed sensor drive enables high-speed and high-precision auto focusing, and according to Panasonic, their new lens should focus fast in video too. Focus breathing is also said to be suppressed substantially in video.

In addition to the silent operation achieved by the inner focus drive system, the step-less aperture ring and micro-step drive system in the aperture control section help the camera smoothly catch up to brightness changes when zooming or panning.

The rugged metal body is also dust and splash-proof; the lens design can also withstand harsh conditions even at -10 degrees C while retaining normal operation. The 9-bladed aperture should provide a pleasing rounded bokeh. The front filter diameter is 77mm, which is a very common size for circular polarizers, NDs, UV and other type of filters.

As far as video image quality, see for yourself in this Panasonic produced piece here:

The new Lumix G Leica DG-Vario Summilux 10-25mm f1.7 is available to pre-order at B&H for $1,798. The lens is expected to start shipping next month.