There’s a dream that many indie filmmakers hope will someday become true. That is having the ability to edit videos on the go with minimal hardware needed. When the iPad was introduced to the masses, many of us thought that the scenario in question was just behind the corner. History has taught us, however, that we were wrong or at least expecting the positive outcome a little bit too early.

Now, roughly ten years later, we have some tablets and phones with enough computing power to handle editing and many serious editing apps have popped up in the Android ecosystem. Justin Brown of Primal Video has made a comparison between the most used Android apps and tried to find out which are the best video editing ones.

Have you ever searched for “video editor” in the Google Play Store? You’ll be overwhelmed by a plethora of different apps, dozens of them. They are just too much for a single (and useful!) comparison, so we’ll reduce them to a shortlist of four:

Now let’s tackle them one by one. The first one we’re going to examine is Adobe Premiere Rush. It’s the mobile version of the renowned desktop editing suite Premiere Pro and that is quite obvious once you see how many features it packs. The app is simple and straightforward to use while being extremely handy for some tasks.

It’s easy to change the image ratio, like going from 16:9 to square or 9:16 and so on, as you could do to publish on different social media platforms. It has great audio controls, and most of all it’s the only app that is really cross-platform, meaning that you can start your edit on a tablet and then move to a desktop to finish the edit. Be warned, though, not all devices are supported. The complete list can be found on Adobe’s website, and most of all there’s an important feature missing: you can’t reverse the speed of a clip.

That is a weird missing feature for an app produced by such a staple brand in the industry. The app is not free but has a monthly subscription of $9.99, that is unless you already paying the monthly fee for the whole Creative Cloud or Premiere Pro. In that case, it’s complimentary. 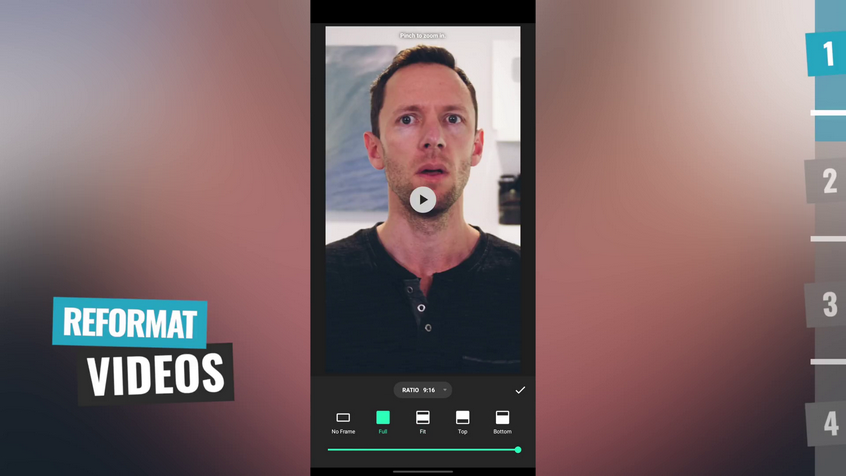 Inshot is probably the easiest app in the pack. The interface is so intuitive that you’ll get around in no time. It’s not as powerful as some of its competitors and misses advanced keyframe or audio management, or even the ability to stack more layers one on top of the other, while it has the same re-framing ability like Premiere Rush.

But then it’s also almost free, since you can unlock the watermark-free export just watching an ad (for each export) or paying a 1.99$ fee. There’s a pro version that gets you a whole lot of effects and filters for as much as 4.99$/mo or 42.99$ in a single one-time payment. All in all, it’s a decent and pretty simple app, yet with quite some power in it. Kinemaster aims to be the most complete video editing app on Android, and it’s getting there. It packs a lot of features, most of them unheard when it comes to competitors’ apps. There’s audio ducking and keyframing, for instance, but there’s more like them. Multitracks and video layout presets are just some of the nice add-ons that make editing on this app so quick to learn and pleasant to use.

Is it perfect? Not yet. As a mobile editing app, it holds a lot of features, but there are two main downsides. The first one is the missing re-framing tool, a must on a modern mobile app, and the second one is the lack of serious color grading options. In 2020 that’s a highly demanded functionality. Finally, the last on the list is VLLO. It’s a small powerful app. Just like the other rivals covered in this write-up, it has a nice and simple interface, but there’s a couple of details that set it apart like the audio waveform, for instance.

On the video track, you’ll see a waveform that can be very useful if editing an interview or any other project with a lot of dialogue. There’s hope for some features that are already on the iOS version to come soon, as the Picture in Picture, but that does not mean that the app still does not pack a punch.

Consider that this tiny app has Adjustment Layers, a feature you’ll usually find implemented in high-end desktop editing suites. It is really incredible, especially if you think that the full version will set you back just $10. So, those were the candidates, but who is going to be the winner? Justin chose Adobe Premiere Rush, and it’s hard to argue. All the mobile editors have great features, nice interfaces, but Rush is the only one with the option to go from tablet to desktop seamlessly and most of us have even a valid license thanks to our subscriptions to Adobe.

It’s hard not to fall for it, right? So, let us know, do you edit on the go on mobile platforms? Do you think that there are better apps for that? Let us know!