When rumors started popping up about Sony potentially using a smaller CFexpress format in the a7S III I got worried. I am fortunate enough to be deep enough in the industry to know what was coming, but I also knew that the launch of CFexpress Type A cards was going to lead to plenty of confusion. Come launch day everyone knew what we were dealing with, a surprisingly good situation with dual CFexpress Type A/SD slots.

Still, why CFexpress Type A in the a7S III? And for what modes exactly? Plenty of people are hoping that their SD cards will still give them what they need as well. Matt Johnson is here to help break down all the different modes, options, card types, and more to help you determine what to get before your a7S III arrives.

Johnson dives deeper into the dual card slots. Both slots are the same, and can take either a CFexpress Type A or UHS-II SD card with full compatibility. You can even mix and match. It’s a nice evolution of the old school SD/Memory Stick slots on early Alpha cameras.

The better news is that practically all 4K recording modes, including 10-bit, will work with SD cards, assuming they are at least V60, or even V90 in some cases. No matter what cards you use the simultaneous recording options, such as backup, relay, and sorting. 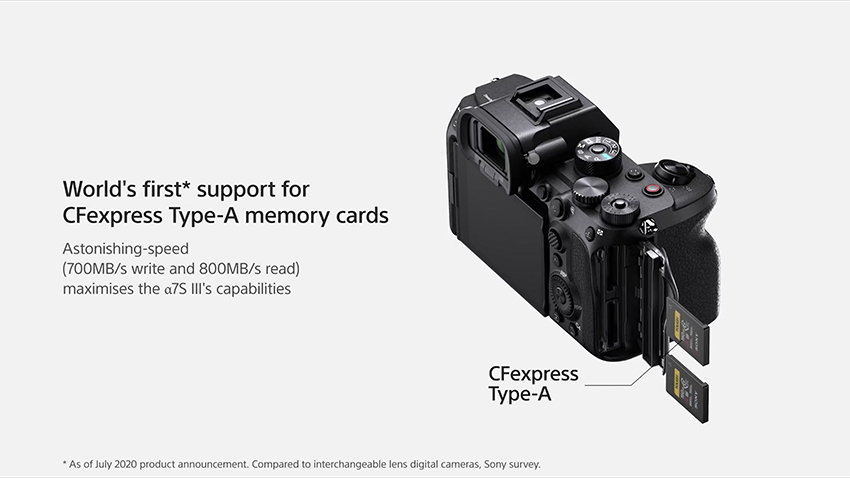 To reiterate Johnson’s point here, you should be making use of both slots for redundancy or organization. It’s available and super useful for professionals.

Answering the question of “Why CFexpress?”, Johnson compares current speeds. Type A cards can already hit 800 MB/s while SD at max is at 300 MB/s. Having both as an option is both accounting for current kits and future proofing the system. As for which modes work with only CFexpress cards this is fortunately simple to answer. There is only one mode that is locked to CFexpress Type A: 4K 120p in XAVC S-I (intra-frame)using the S&Q Mode.

Reason being that this demands an insane 1200 Mb/s speeds. All the other modes are okay with UHS-II V90 SD cards, and some of the basic ones, including 4K 10-bit 24p XAVC HS, are fine with V60 cards. Be aware, if you opt to mix and match your media, the camera will default to the capabilities of the slower card. So if you have CFexpress and SD, the camera will be limited by the SD card.

Let’s say you are decided on what cards you are gonna get and that decision is to go all in on CFexpress Type A. Right now your only options are Sony’s 80GB and 160GB TOUGH memory cards. They are expensive. Though keep in mind that some places are offering a discount if you buy it with the a7S III. If you get CFexpress Type A cards, you’ll need a card reader. Sony is again the only one offering a solution here in the MRW-G2, which does actually support both SD and CFexpress Type A, making it super useful.

You could also wait for other brands to jump in for more options and perhaps better prices. If you want to stick with SD cards for now, the thing to look for is the speed rating. Go through your old cards and make sure they are UHS-II as well as V60 or V90 rated. Sony won’t even attempt to record if your cards don’t have this official rating. Even though your card seems fast enough the a7S III won’t accept it unless it is official. The Vxx ratings show off the card’s minimum sustained speed, and for video it is crucial that it is within these specs.

As for where the line is for V60 vs V90, that comes in when you use the intra-frame XAVC S-I modes. All of them require V90. Most other modes are fine with V60. Though if you plan on using a lot of the S&Q options, even the hyper-efficient XAVC HS modes will require V90 for Slow & Quick Motion. My thoughts are that if you need new cards start picking up V90 at least if you don’t want to spend on CFexpress. The recommendation here is to use the V90-rated Lexar Professional 2000x UHS-II SDXC Memory Card, especially since you can pick them up in sizes up to 128GB, which you’ll need. Another brand to check out is ProGrade Digital, as they offer V90 cards up to 256GB.

Or, you could stick with Sony and get their TOUGH SD cards. They have the SF-G V90 cards up to 128GB, which is what I used when I tested out the a7S III for a few days.

Try to get matching cards if you can. That is always best practice. On to readers. This is more complicated, just make sure the readers support UHS-II speeds to get better transfer speeds. A recommended is the ProGrade Digital Dual-Slot UHS-II Card Reader. It’ll hold two at a time and even has a magnet to attach your your laptop.

Finally, this last part is a warning from Johnson, and that is to be careful where you buy your cards from. Counterfeit cards have become a serious issue in the past decade, and you could easily spend money on a card and be getting something that doesn’t work as advertised. Buy from reputable places, such as B&H. Even Amazon’s third-party sellers can be suspect. One thing to do is test your cards after you get them to make sure you are getting advertised performance.