Sony has announced a new entry-level Super 35mm 4K cinema camera with a host of professional features to give aspiring filmmakers a leg up in creating cinematic content.

With a compact design, the new addition to Sony’s Cinema Line could be a Blackmagic Pocket Cinema Camera killer.

“As part of our Cinema Line, it is an attractive addition for seamless integration into large productions.

Additionally, by incorporating many professional features found in our flagship cinema cameras, it is a perfect camera for up-and-coming filmmakers that are working with tight budgets.” Though not the first super compact cinema camera to be released by Sony, the Cinema Line FX30 is an ideal entry-level complement to their lineup of Cine Alta cinema camera catalog.

With a 20.1 megapixel Exmor Super 35mm APS-C backside illuminated CMOS image sensor, the FX30 captures a 6K image that is then downscaled to 4K without binning and offers 14+ stops of dynamic range.

The FX30 offers a variety of video recording modes including high frame rate modes of 4K at 120fps and full HD at 240fps. Exposure adjustment can also be made on the fly through Flexible ISO mode as the lighting changes, or keep the ISO fixed through Cine EI for maximum quality.

The camera is capable of 10-bit internal recording but is also capable of 16-bit RAW external output.

The FX30 also has two base ISOs, including ISO 800 for low sensitivity and ISO 2500 for high sensitivity, and a standard ISO range of 100-32000. Users can also import favorite LUTs into the FX30 to create a consistent color palette for the image while baking in the color attributes during shooting.

Moreover, the FX30’s Focus Map feature enables users to compensate for focus breathing while visualizing the depth of field and bokeh present in the image while shooting.

Five-axis optical in-body image stabilization (IBIS) in Active Mode enables the FX30 to maintain a stable image while running and gunning, and thanks to its compact and lightweight flat-top design the FX30 can add numerous accessories to threaded attachment points.

This makes the camera easy to use for shooting handheld, capturing low-angle shots, or mounting on a gimbal. The FX30 uses the same NP-FZ100 battery as most of the cameras in Sony’s Alpha line for an easy transition. 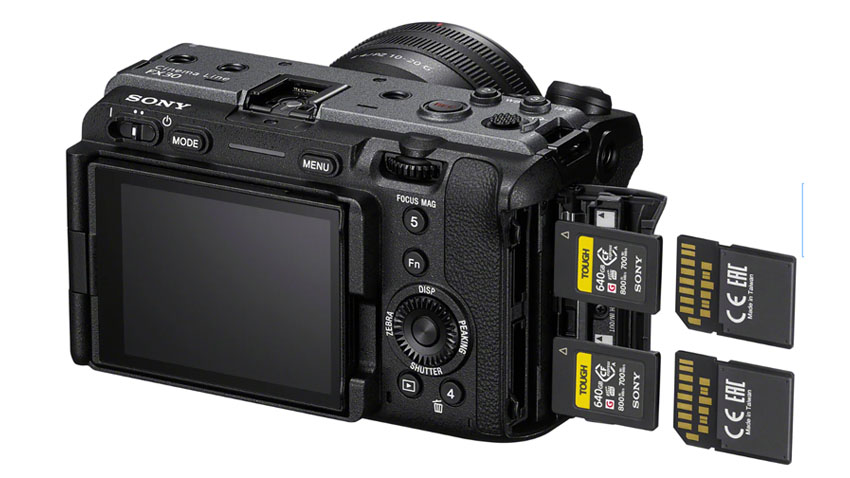 The FX30 is equipped with two memory card slots that are compatible with both CFexpress Type A cards and SDXC/SDHC cards. It is capable of writing at sustained high speeds and will support Sony’s new large-capacity Type A CFExpress memory cards.

Other features include an articulating LCD screen, HDMI, USB-C and USBMicro ports, e-Mount lens mount, and a headphone jack. The FX30 can also be controlled via WiFi through Sony’s smartphone app. The Sony FX30/FX30B is available for preorder and will ship in late October.