Summer is usually a slow period for camera/lens manufacturers, who tend to announce their latest kit at either major trade shows or close to them. However, unlike the old guard of established players, new companies can pop-up at any time and surprise us with a new bit of kit. At NAB 2015 Blackmagic Design announced a million new products, and in between was a tiny box sized Micro Studio 4K camera intended for aerial, studio and live use. Similar “sensor in a box” camera have existed before (see the I/O Industry’s 4KSDI mini camera here) and now new players are entering the market with their own offerings.

Here’s a camera that might have slipped under the radar – newcomer Chinese gear maker ImageVision Technology just announced a new 4K micro camera with a 16MP Micro Four Thirds sensor, H.264 compression and the staggering ISO 102,400 boasting a new level of image and low-light performance. 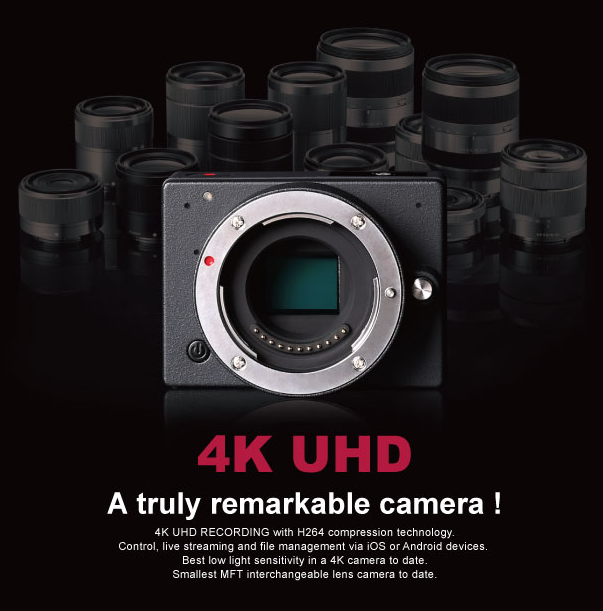 Not many details are know at this point apart from the ImageVision Technology website, which claims 4K DCI and UltraHD capture at 24p, 16MP MFT sensor and mount, wireless control, live streaming and file management via iOS and Android app, in addition to class leading low-light performance as well as the smallest MFT 4K camera to date.

Wi-Fi & Bluetooth 4.0 is present, in addition to continuos autofocus for video and ultra fast focus for stills capture. The camera weighs only 200 grams, and features an expansion port for 3rd party devices primarily in the field of aerial photography. The size of this little camera is perfect for quad and octocopters and if the price is right it may soon find its way across to you. The price and availability are not known at this point. When we find out more, we’ll update the article.

What do you guys think of this new camera (despite the obvious PS job on the top photo with the Sony lenses and copter) Not much faith or give it a chance? Let us know in the comments below.

In addition, Tokina just announced a new zoom lens – the AT-X 24-70mm f/2.8 Pro FX designed to cover full-frame sensors. The lens will be available in Canon EF and Nikon mounts upon release (other may follow, but not known at this point).

The Tokina AT-X 24-70mm f/2.8 PRO FX is priced at $999 and available to pre-order from authorised resellers like B&H and Adorama. The new groundbreaking proprietary optical design uses three precision molded all-glass aspherical lens elements to achieve excellent contrast, sharpness, and corrects for spherical aberrations. One of these elements is very special and difficult to manufacture. G09, is made from Super-Low Dispersion (SD) glass and is a large sized aspherical element.

In addition to excellent optics, the lens incorporates a fast moving SDM (Silent Drive-Module) motor to greatly reduce AF noise making it one of Tokina’s quickest and quietest auto-focusing lenses to date.

Tokina’s exclusive One-touch Focus Clutch Mechanism allows the photographer to switch between AF and MF simply by snapping the focus ring forward for AF and back toward the lens mount for manual focusing. The lens is also designed to stand up to the rigours of daily use by photographers in a wide variety of shooting conditions and environments.