There was a time when if you wanted to get serious about video editing the choices were Final Cut Pro or even Avid. Oh, how much things have changed.

Today, Premiere Pro is the pick for pro work while Blackmagic’s DaVinci Resolve is a standard for color grading. Recently, Resolve has morphed into an all-in-one NLE solution that actually puts it in direct competition with Premiere. How do you pick one to use?

Landon Bytheway from the Full Time Filmmaker recently revealed he made the switch from Premiere to Resolve after five years on Adobe’s platform. Now, apparently this isn’t 100% true – he said he still uses Premiere – but since the decision to use Resolve is more common amongst new filmmakers he is breaking things down.

Having taken a closer look at Resolve as an editing platform, Bytheway is looking at ten categories to directly compare Premiere to see where one may be better than the other. By using this breakdown it’ll help you select between the two NLEs.

The obvious place to start. This one is easy. Adobe is a subscription where Premiere Pro CC costs ~$250 per year. Considering you’ll likely want After Effects, Photoshop, and more it is likely you’ll end up with the Creative Cloud package which will run you ~$630 each year.

Students fare better at $240 per year for the all apps package. Blackmagic is way better here, as they have a free version and the Studio version which unlocks additional features only costs $300 as a flat one-time purchase. Or you might get it for free with some Blackmagic cameras and hardware. Bytheway says that when he started using Premiere after a few quick tutorials he got the hang of it. Putting ease of use at about a medium. Interestingly, when he moved to Resolve he found it a lot more intimidating and complex.

One reason for the difference is that Premiere uses a more familiar layers system while Resolve uses nodes. As layers is common in NLEs and other creative software like Photoshop it’ll click way faster while most will have to learn a node workflow. Nodes are definitely different if you have never worked with them. If you spend enough time with them it will click. Just takes a bit more time and a steeper learning process. There’s also a lot of more basic effects, like speed ramping, that are easier to access in Premiere.

Premiere is getting the ease of use win here, however, YMMV. If you aren’t coming from an editing background at all when you start learning one or the other it’ll be similar difficultly. For now, Premiere and Resolve are both sitting at one win apiece.

Both have similar structures with tabs to move through the editing process from start to finish. They aren’t the same, but they aren’t dramatically different. It’s a tie here. Again, the basic editing process is the same between Premiere and Resolve. If you learn to edit properly using keyboard shortcuts it can be an almost identical experience.

One thing going for Resolve is the relatively new Cut page. It shows all the clips as one continuous timeline that you can quickly sift through and trim. DaVinci takes the lead because of this, putting it up 2 to 1.

Resolve was original built for grading. The editing features were built on top of incredible color grading tools. It has tons of built-in tools and Blackmagic makes a variety of control panels that can make the process even better.

Premiere has a fairly limited set of tools but is still quite capable. Still, Resolve easily takes the win here, putting it up 3 to 1. 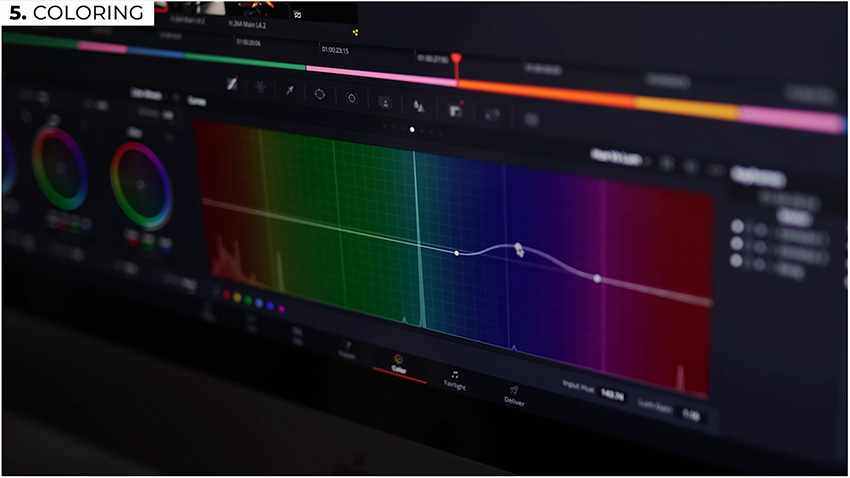 Discussing things like text overlays, graphics, effects, and more, Premiere is a bit easier to use. The key feature is that it has Dynamic Linking between it and After Effects, which is an amazing software.

DaVinci has Fusion built-in now, but it is a little harder to get a handle on. Premiere squeaks out a point thanks to After Effects. That brings the score to 3 for Resolve and 2 for Premiere with 1 tie.

As most editors are using Premiere Pro, it’s a lot easier to use the same software as the people you are working with. In Resolve you can always just export XMLs to achieve the same basic effect as sharing a project file. It’s not ideal though. Both programs do have their own collaboration features built in and if you are all using the same software there is no real reason to believe one is better than the other. So, another draw.

Since Adobe and Premiere Pro are super common, especially thanks to the Creative Cloud, there are tons more third-party plug-ins and integrations available right now. Resolve and Premiere are now all tied up at 3 wins each and 2 ties.

Let the memes begin, Premiere Pro is notorious for crashing at the worst time. Again, your mileage may vary, since some people don’t experience constant crashes. One common recommendation is a more powerful computer as Premiere is a very power-hungry app.

Resolve doesn’t seem to have as many crashes and the reason seems to be how Blackmagic balances the workload between the CPU and GPU. Premiere relies heavily on the CPU and this can cause glitches when heavy workloads are processed. Similar to the integrations category, Premiere Pro has a lot more online support. This includes support from the company as well as being able to find resources such as tutorials from YouTube and elsewhere. This brings Premiere up a point and makes them tie. How should you choose? Well, pick based on the type of editing or usage you have to do. A good example is if you want to do more color grading and only simple edits, Resolve is likely best for that. Or, if all your collaborators and friends use Premiere it is safest to stick there. Can’t really go long if you focus in on one and master it.

Which NLE do you use?