Both DJI and GoPro launched new action cameras in their main lineups. They both took very different approaches. DJI with the Action 2 created something tiny and very different while GoPro just built upon their existing series with the HERO10 and made it significantly better.

Now that the comparison between the two is no longer just a spec battle, the decision on whether to go DJI or GoPro for your next action cam is a little trickier. If you are deciding on your next action cam then you should look at one of these two options. And if you need help deciding this video from Jake Sloan can help.

To break down the differences Jake focused in on 10 topics:

They are actually fairly close when it comes to options. Both cameras will do 4K up to 120 fps and Full HD up to 240 fps. However, the GoPro HERO10 will hit 5.3K at 60p, which is the best spec between the two. The HERO10 also wins on photo resolution at 20MP and simply having better modes. The GoPro has a stronger emphasis on image quality and resolution than the Action 2.

Looking at footage straight out of camera, you want the footage to either be ready to go or ready for the edit. Both the GoPro and DJI have options for that. The GoPro did add a new “Natural Colors” profile which tones down the normally aggressive saturation and contrast. The Action 2 also has a similar approach with very organic but appealing footage. It appears to be a little closer to “normal.”

No action camera has ever been good in low light. This is usually because they have relatively small image sensors. In this comparison, however, the Action 2 squeezes in a slightly larger 1/1.7” sensor compared to GoPro’s standard 1/2.3”. In the tests the Action 2 does appear to perform slightly better in dim lighting. Also, the Action 2 appears to maintain better stabilization in low light.

Both cameras received upgrades to their stabilization systems with the Action 2 going to RockSteady 2.0 and GoPro reaching HyperSmooth 4.0. Interestingly, DJI may have made a better change as it appears that the Action 2 produces a more smooth image with base settings. The GoPro is and can be great, but has a more jerky look to it in some cases. Plus, the Action 2’s horizon leveling feature is available without any extra accessories. 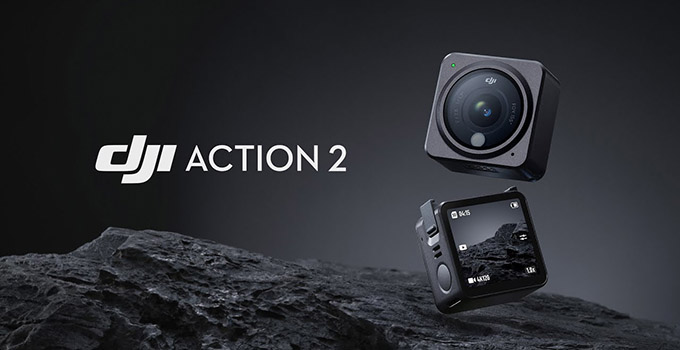 The HERO10 has a good built-in microphone system while the Action 2 seems to be a bit worse until you pop on the additional screen mod. Overall, GoPro’s experience in this area seems to shine through and give you better, cleaner audio right off the bat.

The GoPro is is still a GoPro and has the same familiar size and shape as all the previous HERO cameras. On the other hand, DJI made the Action 2 modular and based it around an incredibly small core unit. This is over 100 g lighter than the GoPro and that may be important for your use cases. Even with an extra module it comes in smaller.

The camera module of the Action 2 has internal storage with about 22GB of usable space, or about 30 minutes of 4K. If you add the battery or screen mod you can then add a microSD card. The GoPro has a built-in microSD card slot. In the end, it’s basically going to get you the same results. An easier comparison here. The GoPro will run for about 40-50 minutes on a single battery. The Action 2 basically stomps it when you use the external mode, getting battery life up to 2-3 hours. This is going to be preferences and use case mostly.

Connecting to a mobile app is sometimes needed with these cameras since the small size and controls can be difficult. The DJI app appears to be more reliable and gives you full control over all the settings. GoPro has some unreliable connections and is a bit more limited.

To start, the DJI Action 2 with Power Combo runs $399 and the Dual Screen Combo runs $519. The GoPro is simply $499 or you sign up for their subscription and you can get it for $399. It seems like DJI gives you more bang for buck. But, they are close enough depending on what you are going for.

DJI is making a serious challenge with the Action 2, but the significant differences to the more classic GoPro HERO10 make this still depend on what you are going to do with it. Which action camera are you thinking of picking up?