We’ve previously covered the previous released by Cinemartin – such as their standalone Denoiser, their Free All-In-One Blu-ray to H.265 converter, as well as their ProRes & H.265 plugin for Adobe After Effects. Windows editors have been long demanding decent ProRes encoding for PC, and with the Cinemartin Adobe AE plugin this is a reality. And today, they are once again upping the ante by offering unprecedented 8K or Super Hi-Vision support with their latest offering. Read the full press release below:

Cinemartin is proud to announce Cinec 4.0, being the world first video converter featuring be able to convert / encode videos to 8K. Cinec 4.0 supports encoding and now scaling videos from / to almost any resolution; SD, 720, 1080, 2K, 4K, 6K, and 8K (TV and DCI). Cinec 4.0 is the first software encoder (and currently the only one) to integrate and produce H265 at up to 8K 422 10 Bit. Cinec now comes with a new codec, the VP9, that adds to its list of pro video codecs including prores, xdcam, etc.

As the demand for high quality video distribution with smaller size – bandwidth has increased, Cinemartin decided to enhance HEVC H.265 and integrate a entry VP9 alternative, the google’s codec response to H265. Other features now include a logos overlay, a LUT importer, a SPLIT feature, and other enhancements including support for 8 CPU cores. 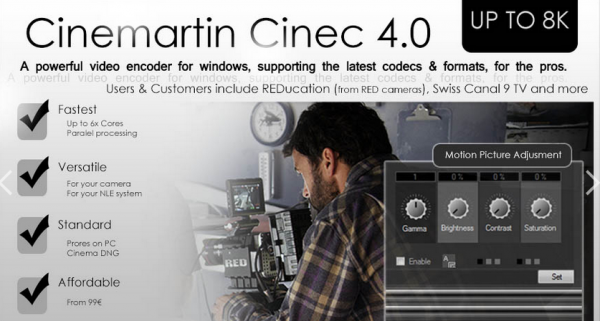 VP9
Cinec 4.0 is the first video converter to include a VP9 video encoder. VP9 codec is the google h.265 response offering similar features with some improvements and enhancments over HEVC H.265.

Custom Presets, Overlays, LUT-S, CROP / SPLIT, Up to 8 CPU cores, and other features just at the PR PDF, download from here: http://www.cinemartin.com/press/201502-cinec4/.